THE AGENCY FOR UNNATURAL RESETTLEMENT AND ASSIMILATION

It’s a weird job, but somebody’s got to do it.

A magical catastrophe tears the fabric of reality, causing unpredictable holes between worlds through which anything might fall—elves, centaurs, trolls, yeti. The brave officers and employees of AURA struggle daily to help the lost and injured, and contain the irretrievably violent while their research staff scramble to find a way to reverse the effect.

Anything can and does pop through into the human world, sometimes with disastrous and deadly results. It’s a race against time to see if the AURA mages can repair reality and stop the inter-dimensional flood before something crosses over that proves strong enough to destroy the world. 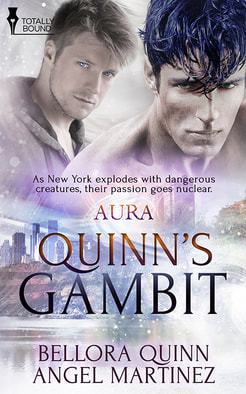 After a terrible magical accident at Berkeley created unpredictable holes between realities – all manner of non-human creatures started popping into our world. These displacements, called RARE (Random Anomalous Reality Events), have taken magic out of fiction and relocated it firmly in reality, resulting in a great deal of chaos and confusion. Displaced elf Valerian works with AURA (the Agency of Unnatural Resettlement and Assimilation) to intercept these beings as they appear in the human world, helping the peaceful ones and subduing the violent, malevolent ones. It’s good, satisfying work, and Val would be happy if he wasn’t so lonely.

Quinten is a young mage just trying to get by, but New York isn't the easiest city to make a living. If his methods are sometimes morally dubious, his heart is still in the right place. Of course for Quinn, the right place means firmly locked away, protected at all costs. Living by his wits and sometimes magically-induced luck, he works as a ‘free-lance magic user’, or unregistered mage and small time con according to the authorities. The last thing Quinn wants is to draw the cops’ attention, but when an Event happens right on top of him, he’s forced to turn to AURA for help. Valerian isn’t at all what he’d expected in an AURA cop, and he certainly wasn't expecting to join forces with the sexy elf, a snarky drow, and a bitter incubus when certain individuals in power try to stop the RARE by any means necessary.

Things are not all what they seem at AURA headquarters, and a greater evil lurks at the top than anyone could have imagined. 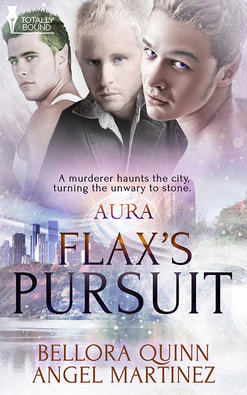 Quinn and Valerian have come through the trials of facing an undead lich queen and the perils of falling in love. Now they work to restore AURA to its previous strength and efficiency while navigating their new life with each other. Fortunately, they’re not in this alone.

Kai Hiltas has taken over as the head of the research department at AURA and has become everyone's favourite workaholic, everyone except his lover Tenzin who has had enough of his late nights and broken promises. As Kai tries to salvage his relationship, he finds a teacher for Quinn who also happens to be one of Valerian's new officers, Flax Wolfheart, a sexy elf with trouble written all over him.

Flax has motives beyond simply teaching Quinn to control his magic. He's trying to recover from his own losses and failures, but he has a plan. The two newest elvish crossovers, Ash and Sage, are sizzling hot and might even like him. With them as backup as he tracks a deadly stone mage and figures out how to teach Quinn, Flax sees his chance to impress Val and snag a place by his captain’s side. On the hunt for both danger and redemption, Flax's pursuit leads him ultimately down trails he never expected. 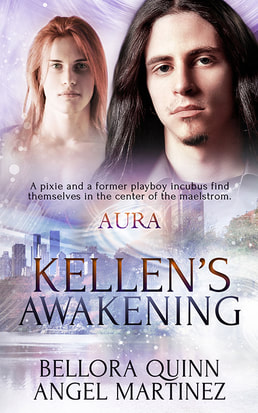 The staff at AURA has had a busy summer. Between chronic understaffing, dealing with warring goblin factions and an unusual number of hazardous Events, everyone is overworked. Sinistrus the incubus, newly hired as an AURA medic, actually enjoys his busy new life of responsible employee and faithful lover to his gorgeous police sergeant, Ness the centaur. Life would be perfect, except for a niggling suspicion about a colleague. Everyone else seems to disagree, but Sin’s certain something’s not right with that pixie.

Kellen, a pixie crossover, loves his job working in AURA medical, even if he is something of an outsider. His job and the friends he manages to make are happy spots in an otherwise dark and secretive life. As the rest of AURA tries to discover the root of the inexplicable rise in violence and large scale Events, Kellen fights to preserve his own life and what dignity he has left.
​
These two unlikely heroes must put their differences aside and navigate tragedy and ever-escalating disaster together in order to stop the sinister forces that hold Kellen in thrall.

AURA's offices have been quiet since the mage tower incident—as quiet as they can be for an agency dedicated to policing holes in reality—and the department heads have been free to turn their attention back to mundane matters. The return to quiet bureaucracy gives AURA's Director of Research, Kai Hiltas, the time to turn his energy to a new issue: a young drow with unusual and dangerous powers named Ryld.

Though his shadows always lurk at the edges of his vision, Ryld does his best to live quietly and not let them hurt anyone. He has his work, his apartment, and a succession of minders assigned by AURA who are, ostensibly, there to keep him safe in his new world and to prevent him from causing any scenes with his shadows. Most of the time, the arrangement works. But one disastrous incident causes Ryld's minder to leave him unattended and lost—the precise thing he was hired to prevent.

To replace the faithless minder, Kai proposes Hank, a half-goblin accountant recently in the middle of a string of terrible luck, while Kai works out how best to get Ryld the magical training he so desperately needs. For his part, Hank truly likes Ryld and insists he would be happier working as Ryld's companion rather than as a controlling minder.
​
As Hank and Ryld slowly come to terms with sharing space—and eventually more—Kai's search for a teacher for Ryld takes them out west on the invitation of the Elvenhome's aelfe queen and right into the lap of inter-elven feuds, ancient prejudice, conspiracies and trafficking rings. What should have been a pleasant visit soon turns into more than even forever-scheming Kai can handle.